Loch Katrine lies at the heart of the wild beauty of the Trossachs and was the inspiration for Sir Walter Scott’s famous poem “Lady of the Lake”. 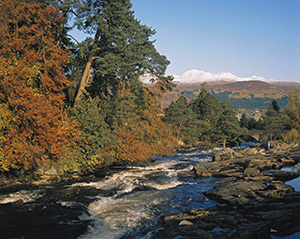 Touring north from Holy Loch and leaving the shore of Loch Fyne, you strike east and up through dramatic Glen Kinglass, with its towering peaks and tumbling torrents, to emerge at the viewpoint aptly named “Rest and be Thankful”. Thrilled by the view down Glen Croe, you will quickly descend to Loch Long and the pretty village of Arrochar, before cutting east through the hills to the village of Tarbet on beautiful Loch Lomond.

A left turn here takes you north, by the long narrow finger of Loch Lomond to Crainlarich and through Glen Dochart to the attractive village of Killin in the heart of the Breadalbane mountains. Here the River Dochart rushes over the Falls of Dochart and into Loch Tay. South lies Lochearnhead in its magnificent loch-side setting – one of Scotland’s premier water sports venues. The road south brings you to lovely Strathyre and the picturesque Balquidder churchyard, final resting place of the famous outlaw and folk hero Rob Roy MacGregor.

If you elect to journey south from Tarbet, you will be amply rewarded with stunning views of Loch Lomond, with towering Ben Lomond and the surrounding hills forming a colourful backdrop. Past the pretty village of Luss and the championship Loch Lomond golf course, you round the southern end of the loch. Through the town of Balloch, where the pleasure boats cluster on the River Leven’s mouth, you approach the attractive villages of Drymen and Aberfoyle. You are now entering the compact area of stunning mountain and loch scenery called The Trossachs, which marks the transition from the Scottish Lowlands to the Highlands. Loch Katrine lies at the heart of the wild beauty of the Trossachs. It was the inspiration for Sir Walter Scott’s famous poem “Lady of the Lake” and the tiny vintage steamship, which carries sightseers around the loch, is aptly named SS Sir Walter Scott. 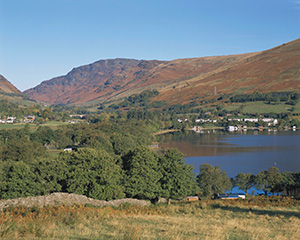 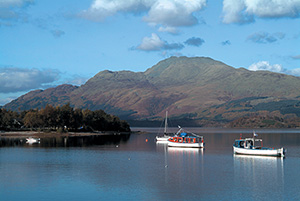 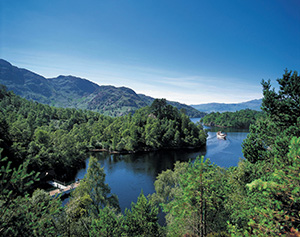